Planning to connect cities in the United States to Japan and Korea via its hub at Ted Stevens International Airport in Anchorage, Alaska, a la Icelandair’s routes to Europe via Reykjavik, Northern Pacific Airways (NPA) rolled out their first painted 757-200 at an extravagant event at southern California’s San Bernardino International Airport (SBD).

The airline is aiming to launch service later in 2022, although that may slip to 2023 due to the complexities of starting an international route system.

Founded in 2021 by Rob McKinney and Tom Hsieh, Northern Pacific has already purchased six Boeing 757-200 airliners, and their first one has been painted and is completing its C-check at Certified Aviation Services at SBD. The three-class interior (business, economy plus, and economy) has not yet been installed. The airline is a subsidiary of FLOAT Alaska, which also owns regional carrier Ravn Alaska. 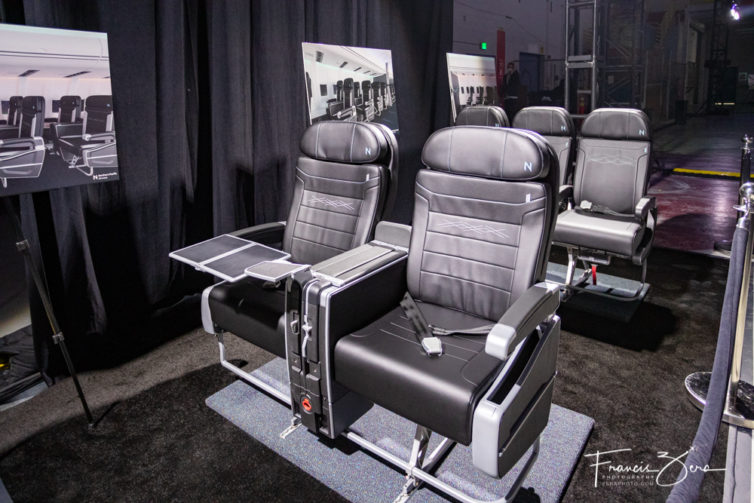 The interiors will be of the three-class variety typical of LCCs: business, premium economy, and economy.

We sat down with NPA’s CEO Rob McKinney for a quick interview before the unveiling.

Asked why they opted for Boeing 757s, which are getting long in the tooth (Boeing stopped production in 2004), McKinney said “it can do the mission we need out of the gate,” especially as the Airbus A321XLR is not available yet. 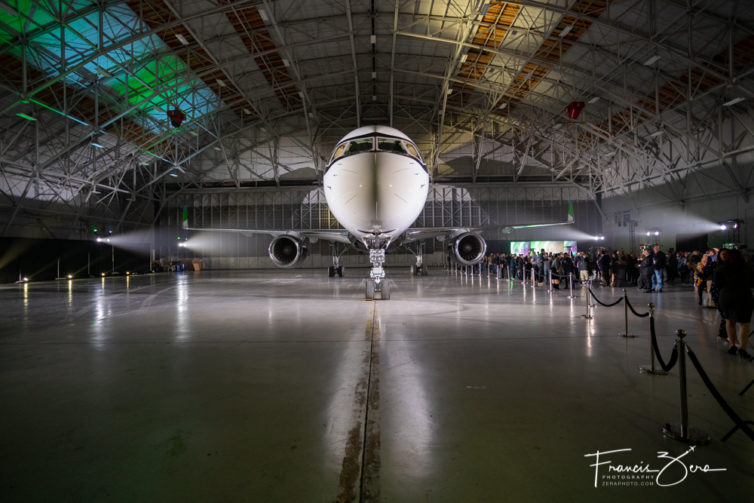 “We see this as a timing play – the window that COVID has given us to start an endeavor like that requires us to move quickly, and 757s are available,” he said. The jets were acquired from aircraft broker Aersale, and include ex-United and American airframes. Their first aircraft, N627NP, was originally delivered to US Airways in 1995, and remained in service with American after the two merged in 2013. The plane was stored in 2020 until it was purchased last year by Northern Pacific for a return to service.

The 757-200 has a maximum range of roughly 4,400 miles, which is plenty to get from most cities in the United States to Anchorage, and then onward from Anchorage to destinations in Japan and Korea. “Nothing’s final and we’re limited in what we can say because of the rules of the U.S. Department of Transportation. We’re looking at Tokyo, Osaka, Nagoya, and Seoul, and on the U.S. side, Los Angeles, San Francisco, Las Vegas, New York, and Orlando, but I can’t announce those as routes as we don’t have authority yet,” he said. 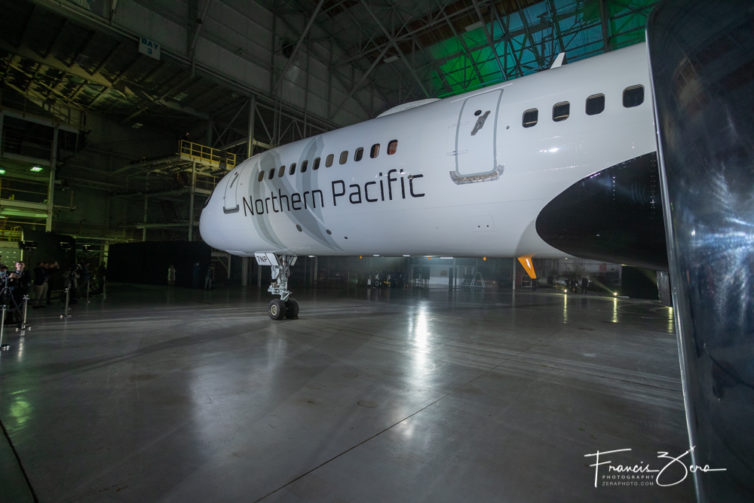 The livery is black, white, and grey, …

McKinney said their plans don’t include belly cargo, and the interior will max out at 180 passengers to allow for the fuel loads necessary for the long routes.

Asked about the timing of the launch in light of the pandemic and reduced travel demand, especially internationally, he said “If we had tried to do this in 2019 this would have been impossible. There wouldn’t have been slots available, wouldn’t have been gate space available at terminals. Trying to get this accomplished in a peak market would have been exceedingly difficult, if not impossible. So we really see this as an opportunity, not a barrier.” 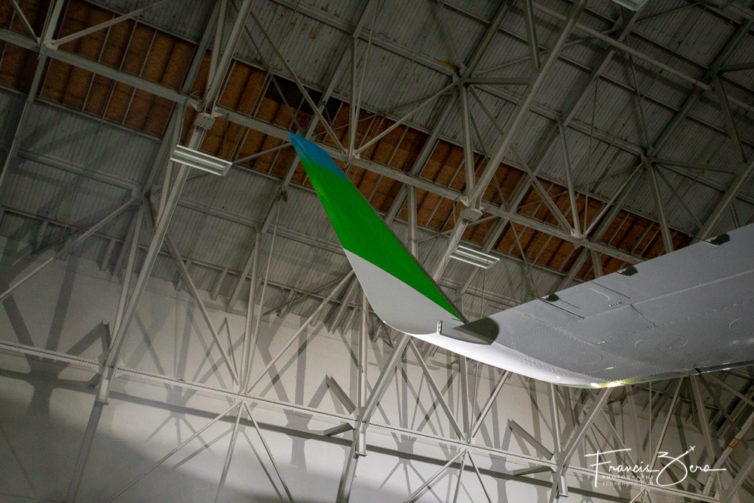 With green and blue winglets

As for expected passenger demand, McKinney said “We’re going to be in the LCC space so we believe we’re going to get some traffic that’s not traveling now because it’s cost-prohibitive to them.

“We also think we’re going to get traffic from those for whom it’s too painful – it’s three or four stops from a secondary market like Osaka or Nagoya – we can get it down to one stop for them; we can also make it a more pleasant experience for them through customs in Alaska versus a three-hour long line at LAX. We believe that our service will be unique enough that we will fill planes.” 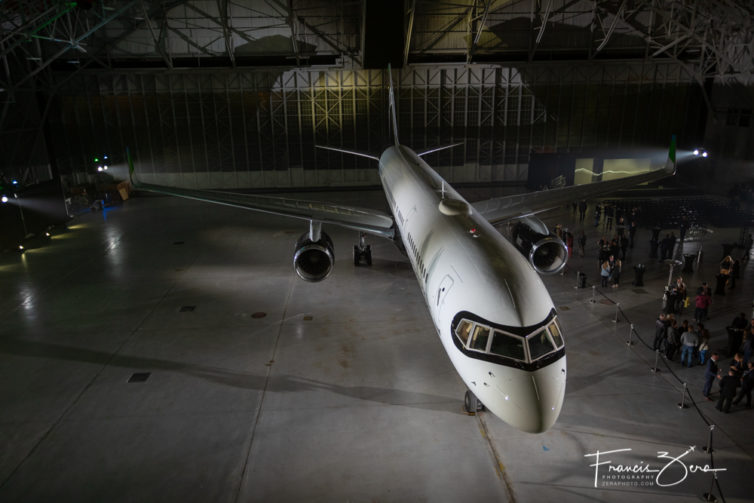 Even though this particular aircraft is 27 years old, it has the range and capacity to service many transpacific routes with one stop in Anchorage.

As for cargo, he said “The opportunity for cargo is definitely there – don’t know how much of a business plan that can actually be, because of the stage length to go 7 hours and carry reserve fuel – we’re going to be limited to about 180 passengers on the density side, so that’s not going to leave much space for cargo.”

Another intriguing offering from the startup relates to its frequent flyer program, which will provide users with the FlyCoin cryptocurrency rather than traditional air miles.

“We believe that’s one of the things as a value propositions that’s going to set us apart, because instead of a point or a mile you’re going to get cryptocurrency that will never decrease in value, it might actually increase in value, and its tradeable into other cryptocurrencies or back into fiat money. Eventually we think all the other airlines will eventually have to adopt it because that will be the expectation.

“Out of the gate we’ll accept it for airfare, and we are working with vendors at ANC and within the city of Anchorage so that they will accept it as payment as well,” McKinney said.

Watch for updates as Northern Pacific moves toward certification and route approval toward its first flight.

The Loss of My Favorite Travel Partner Forever

I might as well get this out of the...
Read more
Research Articles

United Snuck a Flight Simulator Onto Its App. And It’s Surprisingly Good.

Last month I found myself with a full-day layover...
Read more

Newspaper is your news, entertainment, music fashion website. We provide you with the latest breaking news and videos straight from the entertainment industry.